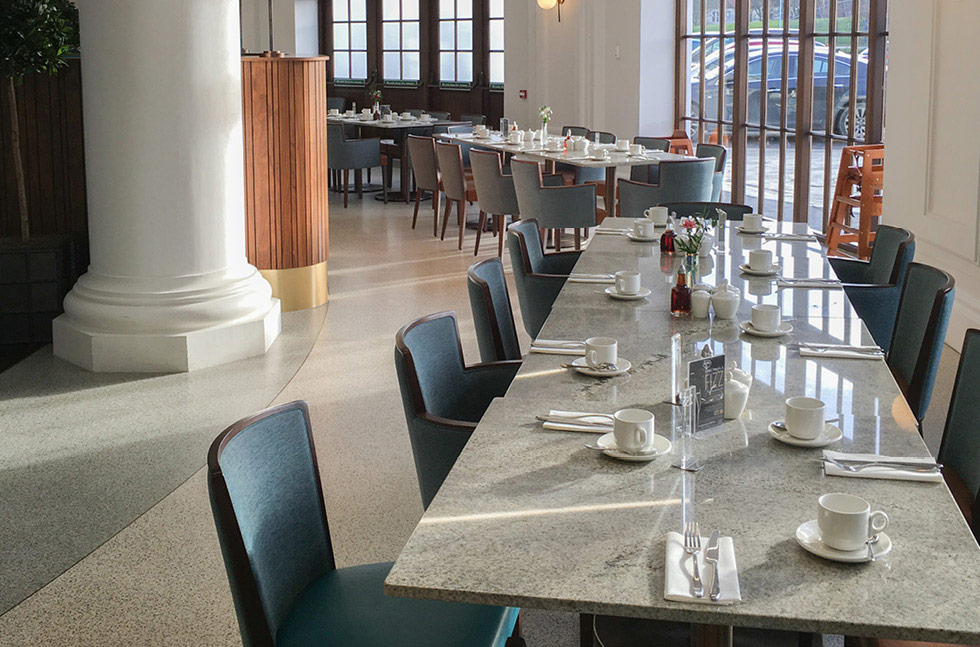 The historic Spanish City utilised flooring solutions from Flowcrete UK in its 2018 restoration project that saw its Edwardian features brought back to life.

Starting life in 1906 as a makeshift theatre with temporary stages painted like Spanish streets, the Whitley Park area was a place for William Simcocks’ North East Toreadors group to perform. With rising popularity, the area quickly became known as Spanish City.

‘The Dome”, as it became known, first opened its doors in 1910 and was a hub of activity and interest to the residents of Whitley Bay and visitors alike. Home to many attractions, including a theatre and two wings of shopping units, everyone marvelled at the great Spanish City Dome, the second largest in the country at that time after St. Paul’s Cathedral.

In the 1950s several different leisure activities were hosted at Spanish City until it closed its doors in 2002. Almost eighteen years after its closure, North Tyneside Council has reopened Spanish City and restored it to its former glory, thanks to support from the National Lottery Heritage Fund and its players.

Graham Sword, Senior Manager, Regeneration, North Tyneside Council, said: “We worked closely with a number of contractors throughout the restoration project to ensure the iconic building was sympathetically restored and remained true to its rich history.

“The choice of flooring to be used inside the Dome was a really important consideration and we are pleased with the end product, which looks great.”

The venue now includes family-friendly venues, a high-quality steak and seafood restaurant, tearooms, event spaces and a Champagne bar, taking residents back to its former luxuriousness.

Kevin Potter, Flowcrete UK’s Managing Director, said: “The careful renovation of the Grade II listed building’s iconic dome, reconditioned into a restaurant, was paramount to the success of the project. Every inch of the space, from the floor to the ceiling, had to be carefully considered to deliver on the required aesthetics and functionality.

“With the devil being in the detail, the expertise of Flowcrete UK was called upon to find the ideal flooring solution for the dome area that would merge Spanish City’s early twentieth century heritage with modern building technology.”

First, over 500 m2 of the semi-dry cementitious Isocrete K screed and Isocrete K Screed HDP was installed alongside underfloor heating, in order to provide a heavy-duty base for the resin flooring.

To pay homage to the twentieth century glamour, 200 m2 of the decorative seamless terrazzo system Mondéco Earth was chosen in two complementary colours to form concentric circles around the dome. The neutral colours, separated by metal borders, provided a harmonised contrast to the dark timber flooring used in the centre of the dome.

To keep both staff and diners safe even with the risk of dropped foodstuff or beverages, slip resistance was incredibly important within this space. To fulfil this, 200 m2 of Flowcrete UK’s Flowseal PU Matte (Ultra) with anti-slip aggregates was utilised to coat the Mondéco system, increasing onsite health and safety at no aesthetic expense.

Above the floor, the ceiling of the central space has been removed from the ground level, allowing visitors to see the fully restored dome in all its glory from the inside, for the first time in over 100 years.

From the floor to the first storey ceiling, full height windows have also been fitted, in keeping with the original Spanish City. These windows look out to sea and provide a fantastic view of St Mary’s Island.

With new life breathed into the historic venue, the iconic Spanish City is once again an integral hub within Whitley Bay. 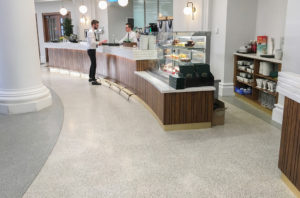 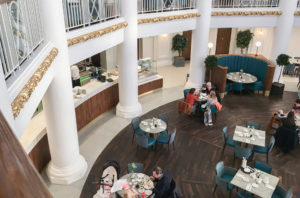