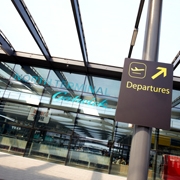 Gatwick Airport’s North Terminal Departure has recently been completely refurbished using products from Mapei UK to deliver a robust flooring system that tolerates the demands of a busy airport terminal.

As the UK’s second largest airport and the most efficient single-runway airport in the world, Gatwick Airport required a screed that could endure the high volume of footfall which it encounters daily. Mapei specified a screed containing their Topcem binder, also including Mapefibre NS12 polypropylene fibres, to replace up to 9,000m2 of the previous flooring in the North Terminal Departures. Topcem, which carries an EC1 rating, produces a perfect screed to use prior to the installation of any flooring where rapid drying is required – allowing light foot traffic after just 12 hours, ensuring the airport experienced minimal disruption. Mapefibre NS12 helps to create a strong matrix within the screed which is more resistant to the stresses induced by the setting and hardening process. Once laid, the floor was left for 28 days before it was drop-hammer tested, where it received a Category A rating. With Gatwick’s moving annual total passenger numbers recently reaching over 41 million, the airport required an abrasion resistant flooring for some 400m2 of the baggage area floors. Mapei’s Ultratop Industrial was specified because of its excellent abrasion and wearing resistance to the high volume of traffic in the area. To prevent staining the Ultratop Industrial was sealed with one of the products from the Mapefloor range.

Level and lay in a day, even over old adhesive residues, with Level IT Pro30

UltraFloor are known for providing expert and quality subfloor preparation materials specially curated to handle a variety of flooring environments. […]

Ryebrook Resins Flooring Ltd, who were a pioneer in the installation of resin floors to industrial, institutional and educational clients […]

Equipment manufacturer Husqvarna Construction Products further strengthens its position on the global floor grinding market by launching not one, but […]