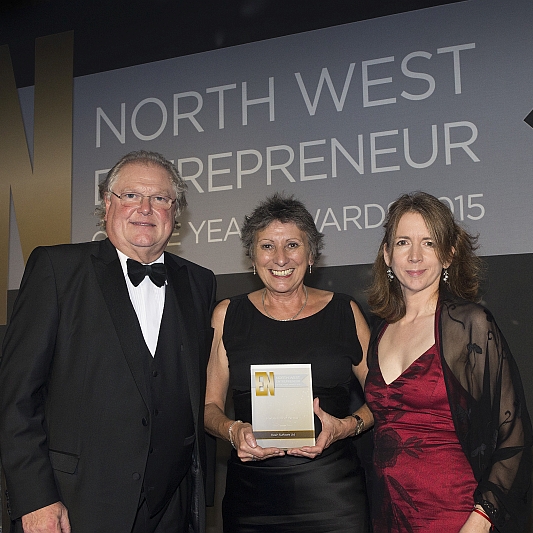 The Awards, created by Excel Publishing, were presented at a lavish ceremony at The Mere Golf Resort & Spa facility in Cheshire and saw winners in 14 categories crowned, representing the best in owner-managed businesses in the North West.

RSL’s win was testament to 12 months of growth and development for the firm, based in Hazel Grove, under the stewardship of Managing Director, Ivy Wroe.

Ivy commented: “It is a terrific honour to be handed this award, and it’s recognition for everyone’s hard work and their contribution to a great year for us. As one of the UK’s leading resin floor and wall manufacturers we see it as part of our role to push back boundaries – both in terms of product development and geography – and excite our industry with new ideas. It has a galvanising effect on everyone. Doing well in awards is the icing on the cake.”

Commercial Director, Martin Wroe, added: “Winning this award means the world to us. We are proud to be a British manufacturer in a global marketplace, and it demonstrates that what we do is being noticed and recognised by the business community.”

RSL’s entry centered on the company’s environmental standards, and the growth of its exporting activity, which has grown organically in recent years through UK contracts resulting in international projects in Russia, Romania, Norway, Lithuania, Spain, Australia, the Netherlands, Germany, Ireland, Nigeria, the United Arab Emirates and the Faroe Islands. In 2004 international trade accounted for 0.1% of RSL’s turnover, it now accounts for 20%, with predictions for an increase to 35- 40 % of turnover in the coming years

RSL’s win was also due to its commitment to product innovation, including its development of a new range of greener, easier-to-use fast-cure resin products.

For a full list of Entrepreneur of the Year Award winners go to http://awards.enforbusiness.com/.